Chess has been a dominant theme in Russian history and culture from the Middle Ages onwards, resulting in a a remarkable variety of chess sets from a diverse times and areas. Due to the extent and diversity of the culture in the Czarist- and later Soviet empire, this variety extends across vast regions and different cultures. Some chess sets that do stand out include the spire-topped kings in playing sets, the mammoth ivory carvings from village of Kholmogory, and the special featured sets during Soviet days.

The game arrived in Russia by the direct trading routes from northern India and Persia. There is no exact date for this, but by the end of the first millennium the state of Russia was emerging by uniting with many of the eastern Slavic nations. Linder (1979) states that it is not possible to establish an exact date of chess’s appearance in Russia, though it is highly likely that this took place no earlier than the eight century and no later than the ninth or tenth centuries. There was no Russian literature referring to chess until the thirteenth century, possibly due to a negative attitude held by the church, which placed chess together with gambling, dice, and other games, as “devilish illusions”. Many chess historians agree with the conclusion that “this game is the creation of Eastern people”, as claimed by I.G. Butrimov in the first Russian chess textbook, published in 1821. He noted that while discussing the queen and explaining the meaning of the term, the “ancient term ferz has been preserved only in Russia”. K.A. Yanich (or Jaenisch) came also to the conclusion that “Russians did not receive chess from the Spaniards and Italians, but directly from the Indo Persian East”. This is also claimed by Linder (1979).

In Russian folklore and ancient ballads, the game of chess is often mentioned. One ballad recalls how, at the tenth century court of Prince Vladimir of Kiev, chess tournaments were part of regular festivities, as well as entertainment for foreign envoys. The abundance of chessmen found in archeological excavations in Russia, from the tenth to the thirteenth centuries, provides ample evidence that the game was being played in Russia by the tenth century. The earliest, eight century chessmen, excavated at Afrasiab, Samarqand, in today’s Uzbekistan, suggest an even earlier existence.

In the Northern town of Novgorod, ancient chess pieces found in excavations provide good examples of the style of the Russian abstract pieces from the 12th century throughout the fifteenth century. Novgorod was established in the 10th century as a trading centre on the Volkhov river. The first historical mention of Veliky Novgorod was in 859 AD, with city chronicles stating that the town was an important trading hub between Byzantium and Central Europe. According to city chronicles, chess emerged in Veliky Novgorod, the foremost historic city in Northwest Russia, in the 13th century. Of note that chess was banned by the Church in 1286. By the 15th century, Novgorod had prospered to become of the of the most important towns in Russia, with a population of more than 50’000. Extensive archeological excavations took place in the ancient part of Great Novgorod during the middle of the 20th century. A profusion of artefacts were unearthed, and in one particular dig in the 1950s, more than 20’000 objects were discovered, among them some 60 chess pieces from the 12th to the 15th century. Source: Williams G. (2000) Master Pieces; Linder I.M. (1979) Chess in Old Russia. 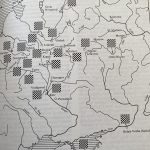