The “Regency” style is probably the most typically French of all chess styles. This was the most popular design of set from the mid-eighteenth century until the turn of the twentieth century. It was the international standard for a long time before being supplanted by the Staunton style. The “Regency” style is distinguished from the “Directory”, almost only by its knight, representing a horse. It seems little, but in reality it allows it to differentiate all the pieces well and that explains why this style has persisted until today. This longevity, as well as its notoriety in the world of the time, mainly in Europe, but also in the United States and in the French colonies of Africa and Asia, make that a significant number of these games were produced , especially in the 19th century and 20th century. What is curious is that we know for certain that this style was born in the 18th century, and yet it does not appear in the works of the time. Certain 18th century paintings and engravings represent it.

It is possible that this style was created by Charles Cressent (1685-1768), great cabinetmaker, continuator of Boulle and son of a sculptor. One of his trademarks, among other specialities, was the production of game tables. At ease in the art of turning as well as that of marquetry or sculpture, he is one of the rare craftsmen of the time capable of designing and realising all the pieces of a “Regency” chess game.

Some main characteristic features of a “Regency” style chess set include the following features: 1/ the balance of forms. In proportion, the king is approximately twice as high as the pawn. The diameter of the pieces is limited on the one hand to save wood, and use precious woods like fruit trees and on the other hand to limit the size of chessboards. It should be remembered that these games were used a lot in cafes where the tables were small and the space measured; 2/ a second characteristic is the base of the king and queen in the shape of a Medici vase, while the base of the knight and the bishop are spherical; 3/ a third point, the top of the pawn and the bishop have the same design, as the queen, but with two collars instead of one; 4/ the knight is on a spherical base  and is represented by a horse’s head. It’s the only carved piece in the game, the others being turned. Consequently, it is the quality of the knight’s head sculpture that will determine the quality of the game – and ultimately its price; 5/ finally, the last particularity is the shape of the King’s crown with rounded and fairly flat lobes.

Given its longevity, the “Regency” style is less easy to date than other styles, especially since it was produced in large quantities in the French colonies, sometimes copying old games owned by the colonists. What strikes first is the stability of the Regency style, which changed very little in 200 years. For example, both the king and the queen have hardly changed their look. In contrast, the pawns have a more noticeable evolution, helping better to identify the original date of the set. The pawn will go from an upper part practically without a collar to a collar the size of the base which will gradually bend. The rounded part of the summit, for its part, will continue to grow in importance. Another piece that facilitates the timing of the chessmen is the rook. Indeed, rooks have  undergone the biggest changes over time. In the older versions of the Regency style, the rook has a base similar to that of the king and queen, surmounted by a tapered tower. Thereafter, the base will evolve towards a base on foot surmounted by a rounded ring. Finally, in the most recent versions, the rook no longer has a foot but rests directly on its base and takes a nearly cylindrical tapered shape. Finally, the knights will see the stylized representation of the horse’s head from the first periods gradually transforming towards more realistic and precise representations. 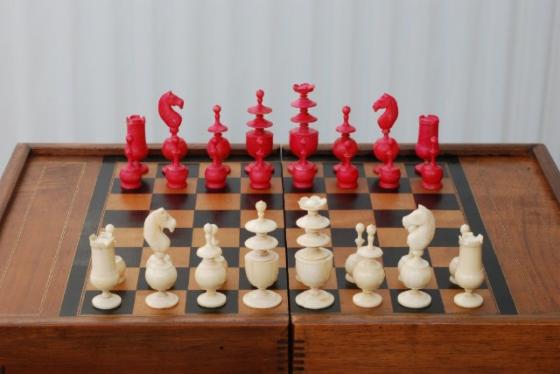