It was at the beginning of the 17th century that the first ivory workshops were developed in Dieppe, one of the most important trading ports with the African colonies of France. The ships coming from Africa brought a large quantity of ivory, first used to make tablets, religious objects, marine objects and others, such as fans or toiletries – and some rare chess games. At the beginning of the 18th century, when the game of chess became fashionable, the workshops of the Dieppe tabletterie began to produce chess games, many inspired by the kingdom of France and the African kingdoms from which the ivory came from. Dieppe’s productions were very limited due to the simplicity of the means of production and the length of training necessary to train a journeyman producing good quality works. Production of chess games continued until the end of the 19th century, until synthetic materials, such as bakelite, ceased the use of ivory. Chess sets that were produced in the 17th century are in very small quantities and in styles that do not distinguish them from those of the 18th. It is reasonable to assume that production really started under Louis XV, with the enthusiasm of the bourgeoisie and intellectuals of the time for chess.

Dieppe was mentioned for the first time in 1030. It is situated on the river Arques, flowing between the “falaises” – the rocky coast of Normandy – into the North Sea, the Channel. Since the Middle Ages, the town and its port were renewed as a starting point for exploration into foreign countries and for their master sculptures and turners of ivory. The fortress on the falaises, part of the former fortifications, and a museum today – the Chateau Musée – has a rich collection of ivory objects.

Features of the “Dieppe” style

The king, queen and bishop are usually busts set upon pedestal stands arising from flat turned bases. These busts are often fixed at an angle which enhances the set and gives it character. The bishop usually takes the form of a jester or ‘fou’. Indeed, one characteristic Dieppe style of the 18th century is the bishop that will look like peasant headdresses of Louis XIV during the beginning of the century, before becoming simpletons covered with round hats, typical of the first part of the century. This will be followed by figures wearing mid-century clerics’ hats. Towards the end of the century, figures wearing Directoire-style hats will appear, which will be found until the Empire. Finally, in the 19th century, the bishops will take, in majority, the place of the formerly singletons.

The knights sometimes resemble seahorses with tails like dolphins and heads similar to horses; in some otherwise similar sets the heads of camels are features instead of horses. Another distinctive form of knight portrays a rider mounted upon a horse which is so truncated that it looks like a child’s hobby-horse.

Another main feature that allows the dating of the pieces is the pawn. In the oldest forms, the pawns can be non-figurative. They will then be wearing caps typical of the late Louis XIV and early Louis XV era. This will be followed by the different styles of wigs that can easily be dated thanks to fashion prints. Then, at the time of the Directory, will appear the bicorns. With the Empire, the pawns will become soldiers with a hat, they are easy to date. One of the pieces by itself does not necessarily allow to determine the exact timing of origin of the sets,  because the different characteristics can sometimes cover different periods. But the combination of the styles of the different pieces give, most of the time, a fairly precise idea of the original year of production.

An important point in Dieppe’s history was the revocation of the Edict of Nantes by Louis XIV in 1685. We know from the archives of the time that some 300 Protestant tablet makers went into exile and fled to Germany, England and the Netherlands. These craftsmen imported and adapted the Dieppe style to their new local context and thus gave birth to other styles, for instance the Geislingen style in Germany. As luxury items, ivory games were not produced during the Revolution period. One of the characteristics of the chess games made by the tabletiers is that they were never signed, which makes it difficult to identify the craftsmen who made them. Generally, Dieppe games are characteristic in several respects: 1/ The pieces and the pawns are in ivory; 2/ the pieces are of the “bust”-type, mounted on a turned base; 3/ the rooks are generally cylindrical, with the design of visible and crenellated stones; 4/ the knights are generally busts of horses ridden by a rider, except towards the end of the production of Dieppe; 5/ the king wears a crown and not a tiara as in Geislingen chessmen; 6/ sets were not signed by manufacturer.

In his note in 1824, P.-J. Ferret, in “Notices sur Dieppe“, stressed that “the turners and ivory sculptures formed a numerous class of artists. Whenever ivory is worked, even in Paris, the artist in question is found to be a Dieppois” 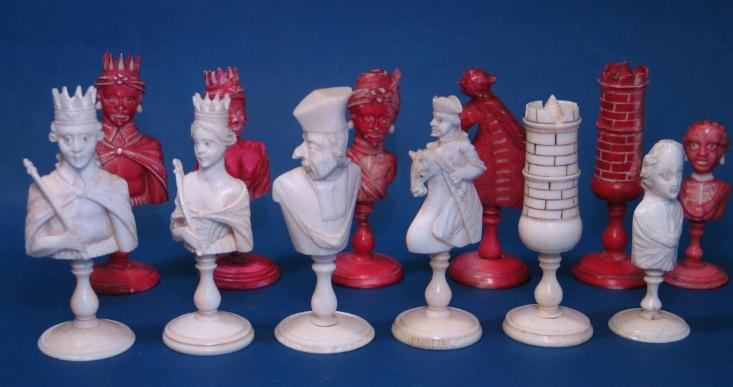 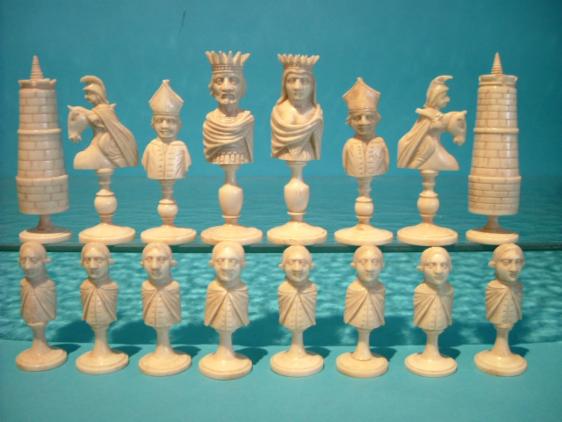