Charlemagne, who reigned around 800, did not know the game of chess, introduced in the West by the Arabs only two centuries later. But the royal abbey of Saint-Denis (France) has long kept among its treasures these spectacular ivory pieces, which legend has it was given to the emperor by the Caliph of Baghdad Haroun al-Rachid on the occasion of his coronation. In fact, these pieces do not date from the Carolingian era but from the end of the 11th century. They do not come from the East but from a workshop in southern Italy, probably Salerno.

Unusual in size, these pieces are too imposing to be handled on a game board: they are ceremonial pieces, made to be hoarded and guarded in a royal or ecclesiastical treasury. Their function is not playful but symbolic. The game was ideal for medieval society. It was after the revolutionary confiscations that the “Charlemagne” set entered the collections of the National Library of France, in 1793. An emblematic work of the Museum of Coins, Medals and Antiques, it is one of the most beautiful objects in ivory that the Middle Ages have transmitted to us.

The so-called « Charlemagne » game is one of the oldest Western chess games. in its current state, it includes sixteen pieces: two king, two queens, three quadriges (rooks), four horsemen, four elephants (bishops), and one infantryman (pawn). Carved from heavy ivory blocks, the pieces are enhanced with gold, with traces of red paint: red was then opposed to white or gold. The military equipment of the infantryman and two horsemen – almond shaped shield and helmet with a nosepiece – makes it possible to date these pieces from the years 1080-1090. Norman in type, this equipment is similar to that which appears on the Bayeux tapestry, also dated to the end of the 11th century. In-depth stylistic study reveals Byzantine and Muslim influences. The pieces were cut in Southern Italy, probably in a workshop in Salerno. Located around 70km south of Naples, in the 11th century Salerno was the main residence of the Norman dukes of Italy. Besides its medical school, the city is famous for its ivory workshops. Reconciliations were thus established between the pieces of Charlemagne and other pieces from these same workshops. 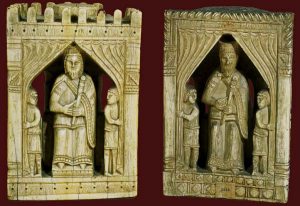 Yuri Averbakh, chess grandmaster and historian, when investigating the historical background of the Charlemagne chessmen, made the discovery that they recorded a real conflict between a Byzantine emperor and an ambitious Norman warlord – in particular Alexis Comnen and his dominating, ambitious mother, Queen Anna Dalassina. They fought against a conquering army of Nordic mercenaries led by Robert Quiscard, who was determined to reinstate the deposed Byzantine emperors, Michael Duca, who was married to Quiscard’s daughter, Helena. The carved ivory queens represent Anna Dalassina and Helena.
As pointed out by Williams (2000), it is significant that in the earlier European chess sets carved in a representational form – the Lewis chessmen and the Charlemagne ones – introduce a queen as the natural companion to the king, replacing the Arabic vizier. The inclusion of elephants and chariots among the Charlemagne pieces suggests that chess may have been introduced to Eastern Europe through the Byzantine empire.
Source: Williams G. (2000) Master Pieces; Bibliothèque Nationale de France. 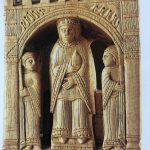 The king, Emperor Alexis Comnen, is shown sitting on his throne, with an attendant on each side holding a curtain open. They are all within a secured small throne chamber, which provides protection from assassination attempts from the rear. 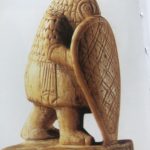 The pawn is similar to the Lewis warrior rooks. He carries the long shield and wears the same style of helmet and chain armour. He is probably a Nordic soldier from Robert Quiscard’s army.